EasyMile: Autonomous Vehicles for the First and Last Mile

Gilbert Gagnaire, Co-Founder & CEO
Would you hop on a bus that has no driver? Certainly Not! This might seem unrealistic, but imagine stepping into a driverless shuttle on a greenway spanning across 5 miles in a crowded metropolitan providing you a reprieve from the busy traffic. The shuttle will not only take you to your destination but will ensure a quick, clean, and safe transit. EZ10—a driverless shuttle—makes such rides possible. When the people of Singapore saw an autonomous shuttle in the Gardens by the Bay without a driver behind the wheel, they were astonished. The autonomous vehicle (AV) that caught everybody's attraction was EasyMile’s driverless shuttle, which has become a reality and is gaining traction internationally.

For Gilbert Gagnaire, the co-founder & CEO of EasyMile, the conceptualization of the company was more of an opportunity than a strategy. Back in November 2013, when he was on a holiday enjoying rock climbing in the Canary Islands, one of his friends called him to join a French company which was facing financial difficulties. Gagnaire discovered that the French company was developing a similar product to EasyMile's EZ10. He did not want to be a part of the company, which later was shut down, but he found the concept to be interesting and decided to make it happen.

He nurtured the idea and founded EasyMile in 2014. The company started providing software powering autonomous vehicles and the last mile smart mobility solutions. Today, EasyMile is a provider of driverless technology and is a fast-growing startup, which is revolutionizing passenger and goods transportation with completely new mobility options.

“There is a real appetite for driverless technology. It is just that most of the time people do not understand the real level of complexity of this job when you want to do it without the safety driver, which is the ultimate goal,” asserts Gagnaire.

With driverless transportation becoming a reality, aircraft ground-handling companies look for automotives that can carry goods in the airport premises. Catering to such demands, the AV industry is undergoing a technological evolution with the development of assistance or automation systems and Ground Support Equipment (GSE) along with other heavy machinery.

EasyMile automates transportation platforms without the need for dedicated infrastructure, unlike with a train or tram

EasyMile automates transportation systems without the need for dedicated infrastructure, unlike a train or tram. Supervised by an in-house agnostic fleet management software, EasyMile’s EZ10 is a 100 percent driverless electric vehicle that carries up to 15 passengers and operates on fixed or on-demand routes. The fleet management software enables the remote and real-time monitoring and control of the fleet of EZ10 shuttles. The autonomous shuttle also has an in-built access ramp for mobility-challenged passengers. Powered by a lithium-ion battery—which can be fully charged within eight hours—the EasyMile shuttles can travel at a speed of 45km/h. A virtual line or route is created for EZ10 to follow; it automatically stops if asked to deviate from its predefined route. The routes can be easily configured to accommodate sudden shifts in demand and new timetables and virtual stops can be created to facilitate the flow of traffic. The vehicle is installed with a mix of navigation and obstacle avoidance technologies that ensures EZ10 stays on the path and negotiates hazards. The navigation tools inducted in the vehicle are lidar, differential global positioning system (DGPS), and odometry sensors that estimate a change in position over time.

With such advanced technologies, security becomes an issue; EasyMile ensures to maintain the security standards for a safe ride for its customers. Considering the factor, EZ10 is built securely with a fully encrypted fleet management system and the vehicle's ability to respond to different situations is independent of the IT network.

The company's hybrid sensing approach combined with shuttle localization through vision, laser, and differential GPS ensures the safety of passengers and pedestrians from road hazards and technical failures. This approach helps in carrying out smooth operations irrespective of infrastructure constraints and weather conditions. Detection of static or moving objects notifies EZ10 to adjust its trajectory and speed leading to obstacle avoidance. Till date, the company has sold EZ10 to 20 countries including Singapore, U.S., Norway, France, Japan, and Finland. In summer 2018, the EZ10 driverless shuttle began operations in Germany at an eleven-acre business park, GreenTEC Campus. The shuttle will carry employees and visitors on a 1.5 km route within the business park.

Building on their extensive experience in their respective fields, EasyMile and TLD have introduced the first autonomous electric baggage tractor that enables both indoor and outdoor driverless operations in full compliance with airport regulations.

The tractor does not require additional infrastructure and is used to transfer baggage and freight from the terminal to the aircraft area, on the service roads. It is fitted with an adjoined cabin that allows the operator at the stand to take control for the final approach of the dollies to the aircraft. With a fully driverless approach, TractEasy operates in normal traffic and is compatible with all weather conditions. The driverless baggage tractor incorporates software that allows a robotized unit to operate in a live and complex ramp environment and ensures protection against outside interference. TractEasy is a battery-powered vehicle designed to run at a speed of 25 km/h with a maximum load of 25 tonnes. The tractor can interact with the flight management system on an aircraft and can travel to the point where it needs to. It is possible due to the navigation and obstacle detection feature is enabled by fusing data from a number of cameras, lasers, odometers, and GPS sensors. The advanced autonomous vehicle solutions such as remote control and communication and safety detection tools used in TractEasy are based on the similar driverless technology as that of EZ10.Both the EasyMile’s driverless vehicles are ideal for transporting passengers in different controlled, low-risk environments such as airports, large commercial sites, business parks, private campuses, or industrial sites. The vehicles address major concerns in the current transportation industry globally such as reduction in traffic congestion, zero carbon emissions, and reduced noise pollution. 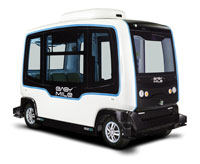 “For the past four years, we have built good rapport and strong relationships with both our clients and suppliers to offer the safest autonomous mobility for people and goods. It is the result of great teamwork and dedication from exceptionally talented individuals,” says Gagnaire. The company employs over 130 highly-skilled and passionate employees specializing in robotics, computer vision, and vehicle dynamics. With consistent support of its team, EasyMile has already executed over 100 driverless projects with more than 300,000 people transported over 200,000 km. The company’s pool of customers includes the world’s largest transport operators, airports, city authorities, corporations, business parks, and universities. Recently, EasyMile and Transit Australia Group together have signed a memorandum of understanding (MoU) with the State Government of South Australia to advance AV manufacturing and technology in the region. “South Australia is the perfect test bed for our autonomous vehicle technology and we are keen to invest in skilling a new workforce and building on the state’s existing AV ecosystem,” expresses Gagnaire. 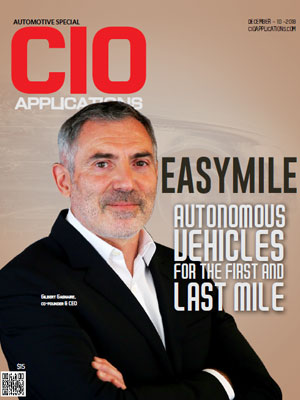